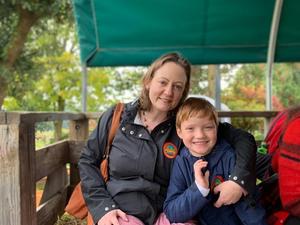 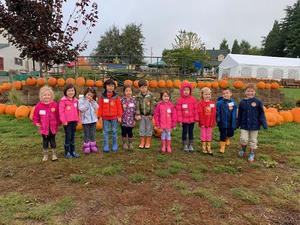 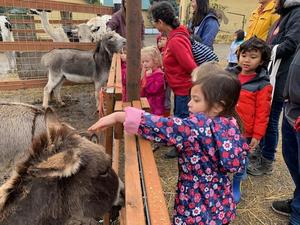 The chilly weather is here, and it's pumpkin season. NWCA parent Stephanie R. writes about the latest field trip.
Fall has arrived and NWCA's students have the pumpkins to prove it!
On Friday, I joined NWCA's pre-k and kindergarten classes on a field trip to the Plumper Pumpkin Patch for a morning of fun, hayrides, and of course pumpkins.  My son Ronan, a kindergartener, woke me up before sunrise and excitedly declared that it was "pumpkin day".  We hurried over to school to pick up a classmate and their teacher, then joined the caravan of NWCA parent cars and SUVs departing through the misty morning air toward the pumpkin patch.  As we pulled into the farm, we saw hay and tractors and animals, and great fields of pumpkins stretching back as far as our eyes could see. Some of the students pointed out the huge tractor tires and slide tunnels over in a play area, while others looked ready to dash straight out toward the pumpkin patch.  After a quick snack, a farmer greeted us and led us into a large barn filled with hay bales to sit on. The farmer asked the students if they know what grows at the Plumper Pumpkin Patch, and hands shot up. Pumpkins!  Apples!  Also, Horses! Duckies! Goats!
The farmer gave a lesson about all of the different kinds of pumpkins and gourds that grow on the farm, and then just as some of the students were starting to get wiggly, it was time to meet the animals.  The farmer cautioned that there were two rules for visiting the farm animals: 1) Don't pet the pig because she doesn't see well and may bite and 2) Remember to wash your hands after touching the animals.  Then the farmer opened the big door at the back of the barn leading to the farm, and we headed out to meet the animals. Some initial observations voiced by our NWCA students included "Look at the piglet!", "Wow, turkeys are way bigger than chickens", and "Yeesh, it's stinky here!". Another farmer introduced us to the goats and showed the students the best way to pet them so they don't get startled.  She also encouraged the students to talk to the turkeys, and when they did, the turkeys loudly gobble gobbled back at them in response!
After meeting the animals, we all piled into the back of a tractor for a hayride out to the pumpkin patch. It was a bumpy ride and there were a lot of giggles as the tractor lurched from side to side through the muddy field. When the tractor stopped, we hopped out, and every student was allowed to pick out a pumpkin from the field to take home.  I have never seen children disperse across a field quite so quickly! Some scooped up nearby pumpkins; others wanted to explore all options before deciding.  Once each child had selected a pumpkin, we walked back toward the main barn.
But there was one last surprise before we left Plumper.  The farmer led us over to the play area that some of the students had noticed when we first arrived - a tempting field filled with tires and tunnel slides and hay bale mazes. For the next 45 minutes, everyone let loose to run and jump and play.  Just as it was time to leave, the sun finally peeked out from behind the clouds. We headed back to NWCA with freshly-picked pumpkins in hand and happy new memories of our farm adventure.
From Kindergarten Parent Stephanie R.